My family & I left for vacation today so I may not post much the next week or so. I have commented a bit on the connection between our destinations and books I’ve been reading to my kids over at The Children’s Hour.
Posted by Ray Van Neste at 10:47 PM 1 comment:

Puritans, Your Best Life Yet to Come

There is much wisdom to be gleaned here, both in how we live and in how we shepherd the souls of people. When you think of the pastoral role in terms of “preparing the saints to leave this world in peace when their time comes”, you automatically leave behind much of what goes under the name of pastoral ministry today. We need this perspective simply to understand the Bible and to persevere, but also to shape us into shepherds guiding souls to the Celestial City rather than hawkers of just one more bauble to add to life.

“Third, these Puritans were great hopers. One notable strength of the Puritans, setting them far apart from Western Christians today, was the firmness of their grip on the biblical teaching about the hope of heaven. Basic to their pastoral care was their understanding of the Christian’s present life as a journey home, and they made much of encouraging God’s people to look ahead and feast their hearts on what is to come. The classic works here are Richard Baxter’s massive Saints’ Everlasting Rest, written to show how the hope of glory, analysed by biblical study and internalised by meditation, should give believers energy and direction for present living, and Bunyan’s Pilgrim’s Progress, both parts of which reach their climax with triumphant passages through Jordan to the celestial city. The vividness of the vision of heaven in both Baxter and Bunyan is remarkable by any standards; sanctified imagination gives concreteness and colour to theological perception, resulting in extraordinary power to convey the flow of glory to the Christian heart. The Puritan point, which was first, of course, a New Testament point, was that Christians should know what their hope is and draw from it power to resist whatever discouragements and distractions present circumstances may produce. The unreadiness of pain and death that Western Christians too often reveal today contrasts unhappily with the realism and joyful hope that the Puritan masters inculcated in order to prepare the saints to leave this world in peace when their time came.” (334)

Yesterday I commented briefly on a great editorial from the April issue of Touchstone magazine. Today, I want to mention to other articles from that issue.

First, Amanda Witt contributed “Distant Neighbors: On Keeping Children Innocent When Lesbians Move in.” This is a compelling account of the Witt’s family leading their children as they encounter the “new family” in their neighborhood, two lesbians with a daughter, and the questions this raises for the Witt children. It is honest, humble, faithful and a great example of gospel-centered engagement. One of the greatest elements is that it is not in any way triumphalistic. It seems to me they have handled this very well, but she is transparent about the troubling questions this has raised for their children, questions one would certainly have rather not have raised yet. But, we live in a fallen world, and we need not pretend otherwise. Good fodder for pastoral as well as parental thinking. (the full article is available online)

The second article is another gritty, honest piece from a mother. Annegret Hunter’s “Losers Keepers: The Liberating Power of Negative Thinking” is certainly a keeper! She describes the hectic life of motherhood and how it makes her look like a loser in the eyes of the feminist circles she once inhabited. I smiled at numerous places in her opening sections recognizing things which my wife has also said. Mrs. Hunter then moves to discussing how the gospel addresses us not as “winners’ as so typically suggested in the shallower realms of evangelicalism but as “losers” who need the rescue of the one true Champion. The personal account she gives is moving.
Posted by Ray Van Neste at 1:20 PM 6 comments: 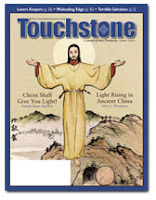 As my most recent issue of Touchstone arrived a few days ago, I realized I had not yet written the post I intended on how much I enjoyed the April issue! This is really a great magazine, and I commend it to you. Let me point to three articles from the April issue to illustrate.

First, David Mills’ editorial, “Dwelling in Tentatives: The Gift of Christian Uncertainty,” is a great word for us. He addresses how Christian’s are so often expected to be certain about every issue and the sense that if we do not have certain answers to everything somehow that disproves our belief.

“The Christian does not need to believe that almost every decision is obvious and crucial.” (3)

With echoes of 1 Peter 4:19, this is very solid, helpful counsel.

Time (and space!) is up. I’ll address the other two articles in a follow up post.
Posted by Ray Van Neste at 4:52 PM 2 comments: 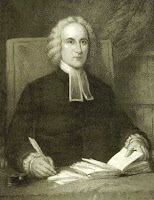 This week in one of our church’s Wednesday night classes we covered J. I. Packer’s chapter on Jonathan Edwards in his book, A Quest for Godliness

. It is a great chapter, but one line especially stood out to me concerning pastoral ministry. It was this description of Edwards from Packer:

May this be said of us in the end. If we just feed the flock other things will flow from that.
Posted by Ray Van Neste at 10:25 PM 1 comment:

By now many of you will have read about Dr. Francis Beckwith’s return the Roman Catholic Church. The story has gained particular attention because Beckwith was currently serving as President of the Evangelical Theological Society. Beckwith said he planned to remain a member of ETS since he could still affirm the Society’s doctrinal statement. More recently Beckwith has decided to resign from the Society.

This has raised awareness about the amazing brevity of the ETS doctrinal statement. In 2001 I delivered a paper at the annual meeting of the ETS arguing that the doctrinal statement was inadequate, using as one example interviews with some prominent Catholic scholars who said they could sign the statement. A slightly adjusted version of the paper was later published in The Southern Baptist Journal of Theology 8.3 (Winter 2004): 74-81. Two blogs (Ref 21 & Justin Taylor) have recently pointed to this paper posted on my Union page.

Thomas Long, Professor of Preaching at Emory’s Candler School of Theology, has written an excellent article entitled, “Stolen Goods: Tempted to Plagiarize.” I encourage you to read it. It is well balanced and considers the common rationales given for preaching the sermons of others. He argues the point I have sought to make in the past that the key issue is integrity. Long writes:

Perhaps as much or more than any other form of communication, preaching depends upon a cord of trust binding together the speaker and the listener, the preacher and hearer. A good sermon consists not primarily in flawless logic, soaring poetry or airtight arguments, but in passionately held truth proclaimed with conviction. To compromise the truth in ways that hearers would consider deceptive makes them reluctant to extend this necessary trust and damages the witness. For evidence, we can point to the hard disillusionment and sense of betrayal experienced by many in congregations where pastors have been caught plagiarizing sermons.

He also makes the key point that what people need is not a good performance but the Word of God applied to their specific situation by one who knows and loves them.

The preacher comes from the pews to stand in the pulpit. Only preachers who deliver their own sermons stand with one foot in the life of the people and one foot in the biblical text. No Internet preacher stands in this same place. No borrowed sermon, however fine, can answer the question that cries out from every congregation, "Is there a word today, a word for us, from the Lord?"

This is a great article. May it be of much help to the church.
Posted by Ray Van Neste at 12:50 PM 4 comments:

By Faith Alone: Answering the Challenges to the Doctrine of Justification

I obtained this book because I wanted to read more particularly about Federal Vision (or Auburn) Theology. The book is presented as a response to both Federal Vision and the New Perspective on Paul. As the introduction states:

In what follows, we want to trace the background and development of two seemingly disparate movements that have surfaced within the evangelical and Reformed church- the New Perspective(s) on Paul and the Federal Vision. (21)

I am fairly familiar with the New Perspective but was not as clear on the claims and concerns of Federal Vision, though I continued to see it arise in both academic and pastoral situations. There is a chapter devoted specifically to Federal Vision and one interacting with N. T. Wright and the New Perspective. The other chapters take up doctrinal issues at stake such as imputation, the active obedience of Christ, and the covenant of works.

Although Al Mohler wrote the afterword this is clearly a book arising out of a Presbyterian setting. This is not a slur, by the way! Justification is the key unifying doctrine of the church (as argued here before), but some of the issues raised here are simply not the issues faced in my churches at the moment and I am not in full agreement with all the nuances. Therefore, this is not a book I am going to read straight through. It served me well in introducing some topics and will be a useful reference for the future.
Posted by Ray Van Neste at 11:51 AM 1 comment:

"Reinvigorating Baptist Practice of the Ordinances"

My article on the ordinances, “Reinvigorating Baptist Practice of the Ordinances”, which I have previously mentioned, is now available online here. I discuss briefly some reasons I think these Christ-ordained institutions have fallen on hard times in Baptist churches and then argue for some specific ways to move forward. Among other things I argue for ‘immediate’ baptism and weekly communion. I would be interested in any thoughts on the article.
Posted by Ray Van Neste at 3:08 PM 6 comments: