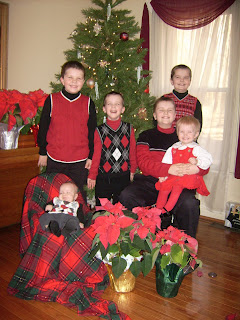 Merry Christmas!
Posted by Ray Van Neste at 12:28 AM 4 comments:

Each year I look forward to the annual holiday sale from Oxford University Press. They regularly have exceptional deals on prominent books. This year the sale is even better because they teamed up with Amazon. See the sale homepage here.
There are not many things in their bible/theology section that I like. They are good for broader reading, which brings back a point I have mentioned before: Pastors need to read broadly.
Some of the categories I particularly like from Oxford are: American history, world history and reference works. Happy reading.
Posted by Ray Van Neste at 11:41 PM No comments:

I am quite behind in items I intend to write about here, but the rush of finals and a cracked screen on my laptop are conspiring against me. :)

, by Peter Robinson, and it is surprisingly good. Whatever you think about Reagan (I like him), this book is compelling and worthwhile for several reasons. First, the author is honest enough to state that as he came to the White House (getting his first real job by fluke as he says) in his early 20’s he was looking for an older man to serve as a role model. We all need such role models, though sometimes people do not want to admit it. The account of this young man trying to define his life, looking for an embodied example of a ‘good life’ reminds me that there are people all around asking this same question. The author did not tell Reagan he had begun watching him as an example. He just watched, thought and discussed with others. Who is watching us without our knowing? What sort of example are we providing? As pastors we should expect to serve as examples to the church (1 Timothy 4:12; Titus 2:7; my previous post mentioned the sore lack of good examples).

The life lessons mentioned in the book so far are really good ones, typically rooted in a Christian worldview. The discussion about working hard and persevering were particularly good. It made me think this would be a good book to give to young men in keeping with the “Month of Man” address I mentioned previously. Robinson discusses the value of work and how we were made for meaningful work (drawing from his conversations with a theologian friend). This idea is so important and contrasts clearly with the spirit of the age which was illustrated in an email I recently received. The email encouraged me to sign up for a certain service which would make me money. It promised to “help you make the income you want without the stress of a job.” Get all you want without the bother of a job! Work is not only a means to an economic end. It is a worthwhile end in itself.
We need to teach once more the biblical idea of work, and it is encouraging to find this concept in a book like this one.
Posted by Ray Van Neste at 9:22 AM 1 comment:

Here is a sad comment from a student. He was discussing his call to ministry and wrote:

“when I felt God calling me to ministry I was truly ignorant about how to live the life, because I can’t say that anybody truly set a good example for me growing up.”

This is far too common. We need for the church to be the church and for pastors to lead well with teaching and example (1 Tim 4:16). This is also a reminder of why we need not just good examples out there somewhere but faithful churches and faithful pastors in every place. May God give us grace to provide examples to the young men coming behind us.

Posted by Ray Van Neste at 4:36 PM No comments:

Each year in the SBC a certain book of the Bible is chosen to be the focus of the “January Bible Study.” Churches are not required to do this, but it does provide a good way to encourage careful study of various books. This year the study focuses on Romans, and this Saturday I will meet with a group of pastors to study through the book in preparation for them teaching their churches.

I have written a brief article on “The Opportunity of Studying Romans” to encourage pastors and others undertaking this study. Romans has had such a significant impact on the church historically and this brief article traces some of this in the stories of Augustine, Luther and Wesley. Gordon Fee has written, “This letter is arguably the most influential book in Christian history, perhaps in the history of Western civilization.”

May the Lord be pleased to bless these studies going on around the country to the good of His church.
Posted by Ray Van Neste at 11:24 AM No comments:

I meant to post this last week but failed to in the midst of other things. Last Sunday Lee Tankersley, one of our pastors currently on sabbatical, was back with us and preached on Romans 8:18-30 in our ongoing series through Romans. Here you can read the text and find a link to the audio. It was an excellent sermon on a variety of levels. It is a good example or preaching pastorally. Sermons ought to expound a biblical text and be rooted in sound exegesis. However, exegesis is the engine and not the destination of the sermon. Some times in reaction against shallow preaching, people tend to think bare exegesis is the goal. Bare exegesis is better than nothing of course, but the goal is to explain what a text means so that people can follow and then to apply that well to a specific congregation. This sermon is a good example of this.
Posted by Ray Van Neste at 11:33 PM No comments: