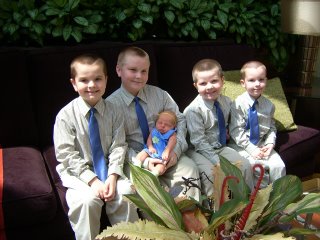 A number of people have asked me how our little girl, now 8 weeks old, is doing. She is doing quite well, and her brothers adore her. Our only problem with the boys is that they all want to always be holding, kissing, touching or helping her. They take much pride in calling themselves her “Mighty Protectors.” In fact this role of theirs was the main topic of conversation as they came to the hospital to see her for the first time. As we have talked over time about the role of men, I have emphasized to them that being a man entails protecting women and children.

Then, in our first day home I overheard Jonathan (our third, 6 yrs old) talking to Benjamin (our fourth, 4 yrs old) while they both peered over the crib at their new baby sister. Jonathan was instructing Benjamin, in his younger child voice, once more on their role as Abigail’s protectors. I listened in as he simply passed on the instruction he has heard. Then, though, Jonathan moved to his own application. He said, What this [being her protectors] means is this: If someone comes in the house to get her …” I thought to myself, “We have not talked about this.” He continued, in his attempted baby voice, “If someone comes in the house to get her, this is what we do. We get a metal bat and we take care of them.” It was all simple matter-of-fact. I stifled my chuckle so they would not hear me, and I also thought, “Way to go!” While we had not addressed this specific scenario, he really understood that he was to do what he could to protect his baby sister (I had primarily envisioned protecting her from sharp objects, falls, etc.!).

holding fast the faithful word which is in accordance with the teaching, so that
he will be able both to exhort in sound doctrine and to refute those who
contradict. (v9)

The reason for this qualification is seen immediately in 1:10f. Pastors need to be the sort of men who can refute false teachers because false teachers are around and they will cause trouble unless they are dealt with. This is also in view when Paul exhorted the Ephesians elders:

"Be on guard for yourselves and for all the flock, among which the Holy Spirit has made you overseers, to shepherd the church of God which He purchased with His own blood. I know that after my departure savage wolves will come in among you, not sparing the flock; and from among your own selves men will arise, speaking perverse things, to draw away the disciples after them. Therefore be on the alert, remembering that night and day for a period of three years I did not cease to admonish each one with tears” (Acts 20:28-31)

You cannot serve the church as pastor if you are unwilling to confront error for the good of the church. Those who cower at danger or try to say these issues are not their concern show themselves hirelings and cowards. The true shepherd is willing to give his life for his flock. Surely here we are to imitate the pattern of the Chief Shepherd who said:

The hireling mentality is too easily encouraged today. The hireling thinks more of his next move, of his reputation, his advancement. The shepherd loves his flock and is ready to die for them. This is not the creating of unnecessary conflict (as some take it). This is love in action, and can only really emerge as we establish close knit community where pastors are not CEO’s or simply hired guns but rather members of the community, the family, who have been called out for service. Brothers, let us protect the church.
Posted by Ray Van Neste at 3:17 PM

What a beautiful family! Four handsome boys and adorable Abigail.

Perhaps you'd be kind enough to do a seminar in Memphis on protecting younger sisters? I know an almost-three-year-old who is in desperate need of such a seminar!

Great post, and great comments on pastors and pastoring.

I agree with J.B., Ray. As one learned in parental instruction, could you recommend the style of metal bat? What oz. bat do you prefer? Easton or TPX? Is the first step of having four sons absolutely necessary? Perhaps you could start another blog entitled "The Thuggery Hour," whereon you review the various resources available for little-sister protection. Let's workshop this.

I agree that pastors must be ready to defend the truth and point out error. One Church my wife and I used to attend was so preoccupied with false teachers that we became weary in our walk. There needs to be a good balance and not think that there's a devil in every passage.

I agree completely. Each truth can be stretched too far.

Barry,
I like the Thuggery Hour, or perhaps The Little Sister Protection Agency! It is helpful to have some brothers first, but we would need to develop something for families like yours where a girl comes first.
And of course bat size will depend on the age of the boys, though ofcourse we want to be moving up in weight at a good pace. :)

Great post. My wife and I have four boys and then a little girl as the caboose!

It has been a great joy for us. Our oldest is 19 now - -time marches forward. So far, it gets better as it goes.