Knowing the Holy Spirit Through the OT 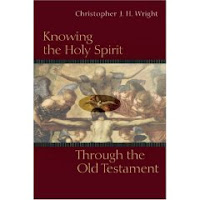 Knowing the Holy Spirit Through the OT

I have perused this book today as part of a broader review project, and I am impressed. You know right away that this topic is useful since it combines two areas where our understanding in the church tends to be limited- the Holy Spirit and the Old Testament.

The book grew out of 5 addresses given at a conference in Northern Ireland in 2004. He mentioned how many people wondered if he could find enough material to fill five talks, and then writes:

“Such is the widespread lack of awareness among many Christian people of the identity, presence and impact of the Spirit of God in the Bible before Pentecost. It’s not that they don’t believe he existed before Pentecost. They believe in the Trinity after all. It’s just that they have never noticed how extensive a role the Spirit actually plays in those centuries before Christ. Of course, it could be that they just never read the Old Testament, but let’s be charitable” (9).

He argues that since the indwelling Spirit mentioned in the New Testament is the same Spirit of the Lord God of Israel found in the Old Testament, then to understand and know this Spirit we need the Old Testament.

The five chapters of the book correspond to the five original addresses. I was particularly taken with the chapter titled “The Empowering Spirit.” Inthis chapter he notes how the Spirit is the one who empowers the people of God. He then notes this same Spirit produces humility in His people. Thus one section is entitled, “Power with Humility.” Good stuff!
Posted by Ray Van Neste at 1:25 PM