In a previous post I commended the Greek New Testament as part of one’s summer reading. Here I want to commend the reading of history. Reading history has so many benefits for people in general and for pastors in particular. It is useful to broaden our horizons and our awareness of the story of humanity. It is also helpful to understand what has gone on before us and around us as we seek to understand and interpret our own existence. In order to remain brief, I will illustrate from two books in my recent reading.

was a fun book to me. The author is the son of the famous general and U.S. President and provides some glimpses of his father’s life from a son’s perspective. Let me highlight just two illustrations which arose in my mind from this book. First, it was interesting to hear of how a young Ike was mentored by Gen. Fox Conner in Panama after WWI. These were uneventful years compared to what was to come. However, Ike himself would later say these were his formative years as an older officer took the time to invest in him, encourage him in reading the classics, and to deepen his mind. Today few of us know about Gen. Conner, but he shaped the key figure in the European theatre of WWII and an American President. Regardless of what you think of Eisenhower, Conner had a significant impact on history by investing in a younger man. Isn’t this the point of discipleship? I was encouraged to invest in the young men around men (not least my own sons).

Second, it was fascinating to learn how devastated Ike was when the plans to invade Europe in 1942 were scuttled. We know D-Day eventually occurred in June 1944, but Ike and Gen. George Marshall worked hard on plans for an invasion in 1942 and lobbied strenuously for this plan. When it was scuttled, Ike wrote that this was the darkest day of his life. His son, looking back, noticed how this decision actually catapulted his father’s career. Ike would not have been the Allied (or even US) commander in the 1942 invasion. However, by the time 1944 rolled around President Roosevelt felt he could not spare Gen. Marshall in Washington so Ike was given the lead command. So, what he thought was his darkest day was actually a blessing, setting in motion opportunities he had not dreamed of. He had said at one point he would be stuck at desk jobs with no advancement.

Now again, whatever you think of Eisenhower, the illustration is clear. The book did not seek to make this point, but God has told us how life works- whether other people recognize it or not! Often times what we interpret as a setback God will use as a blessing. 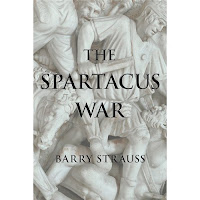 Lastly, I have only begun reading Barry Strauss’s new book, The Spartacus War

, but the opening is an example of brilliant writing. After reading the first page of the “Introduction” I sat the book down and said to myself, “That’s good writing!” Click here and you can read that first page. Reading good writing is not only enjoyable but it also helps teach you to communicate well. As preachers we need to read good writing to enhance our own ability to communicate this great truth as clearly and faithfully as possible.

These are just a couple of examples from my own experience of benefitting from reading history. I hope you will benefit as well.
Posted by Ray Van Neste at 2:26 PM